Birthdays mark the beginning of life. Mine marked the end of Shannon’s.

I arrived in the Great Falls parking lot for some race training and birthday laps, and I heard that something had happened. Things always happen: broken boats, broken paddles, bloody knuckles, and dislocated shoulders. It’s nothing new, just pieces of a story; war wounds to brag about.

I paddled out to the falls and dropped over the first major rapid, Grace Under Pressure. I caught the eddy below and took out to do another lap. I hiked back up river, and upon gaining a better vantage point I saw her boat floating in an eddy. I surveyed the situation. Her lifejacket mysteriously floated up. What I remember next is full of inaccuracies. I was in shock. More paddlers arrived and assisted with recovering her body. It took hours. It was terrible. It was dangerous. But she deserved a proper burial and her family deserved closure.

The river I loved had killed an innocent 23 year old girl. I remembered her smile as I walked up the final bit of the rock next to Great Falls. Like a great big sunflower reaching up to the sky, the sun would shine just for her. But instead of the sunflower following the sun, it was the sun that followed the flower. Shannon was the flower.

She lit up as she looked at the falls. Her heart sang with happiness as she gazed at the rapids. It was clear why 60 Minutes chose her to star in their episode on Washington, D.C. whitewater.

I could not process it. This was the place I felt safest. I was betrayed. The river was not my friend. It was no one’s friend.

When I did paddle, my goal was simple: to be better than I was before. That was the only way that I would kayak again. If I was better than before I might be able to escape my fears of drowning. But it was hard not to think about drowning.

Stuck, barely beneath the water, panic setting in. Wishing I had made different choices. Hoping I would make it through but knowing I would not. Fighting for my fucking life and giving up. Giving it all up. Dying in the water. My body limp. My life jacket slipping off my torso and floating away. Being recovered. My mother receiving an unexpected call with horrifying news. The cancer she was fighting returning with a vengeance. Crying, lots of crying.

I know it’s wrong to think about death in such detail. For years I shut fear out. I shepherded my thoughts like sheep. Each one was guarded. Every thought was evaluated and I decided whether a thought would be allowed to flourish. Positivity was fed and given what it needed to live. Negative thoughts were extricated and disposed of. I’m a gardener; my mind is my garden. I’m also a snake charmer. I keep cobras in baskets and try to tame them before I kiss them on the head.

I moved to California and after some time I was coaxed out to explore some rivers. I attempted perfection. I was terrified at times. I stayed up all night conflicted about whether I should keep paddling. I paddled anyway. I cultivated joy. I forged new friendships. I befriended a kid named Louis. He went to university nearby, and unless I picked him up he didn’t get to paddle. He loved paddling. It scared him too. He was a bundle of joy out there. Jacked up on excitement, he would chatter endlessly about nearly nothing. He spread infectious stoke. It was not long before I looked forward to paddling again.

We were nearing the end of the North Fork of the Mokelumne. Known as Fantasy Falls, it is one of California’s famed jewels of expedition kayaking. I had been paddling well on the multi-day trip. Years of obsessing over safety and precision were showing. I had not flipped on the run. I was still scared. Always scared, never forgetting that one small mistake could mean death. Images of Shannon burned into my head.

We stood above a huge, wild rapid. Tracy said “You should run it.”
I gazed at it in awe. My fragile formulas failed me. We joked that going into this rapid was making an agreement to swim, and if you escaped it was luck not skill. We were far from help, deep in the cascades; away from everything that California is famous for.

Our strongest paddler went first. He took a savage beating in the final hydraulic. His paddle was ripped out of his hands before he ejected. He emerged unscathed. I was not eager to experience a similar thrashing. More paddlers fired into the beast. They were all unbelievably skilled but had varying levels of success. It was amazing to watch from the sidelines, where I intended to remain.

Tracy smiled big at me again. “You should run it.” The seed had taken root. I wondered why bother. It would be no indication of my skill. The rapid was largely luck. But it did look glorious. Despite my best efforts, the seed germinated and blossomed.

I found myself atop the rapid peeling out into the flow, fully focused. I slid down the huge slide and shot into the air, pinballling through the huge waves and finally shooting through the bottom hydraulic. I was ecstatic. I cheered then I started to cry. Water flowed down my cheeks. I was confused. I felt reborn. All my sins were washed away. For a second I had experienced freedom, life without fear. I set down the weight, my fears, my visions of death, and I existed on a new plane of existence. I cried. It felt so good to let go. My mom’s cancer no longer existed. Life without pain. Freedom. It lasted less than a second but my life was forever changed. I realized how hard it is to be human. All of our fears, preconceived notions, and imagined inadequacies prevent us from experiencing life. This is the deal we make when we get a body. It comes with a boat load of fear and troubles. Death is life without fear. I was embarrassed by my flood of emotions and I did a roll to clear my head. I made my way to shore and saw huge snake. I chased it down through the rocks and snatched it up. Ever since childhood I have been fascinated by snakes. I recently learned they are a symbol of rebirth.

Our group collected and we took a picture. The stoke was high. We all had the trip of a lifetime. We swapped stories of our experience in the rapid and continued downstream. 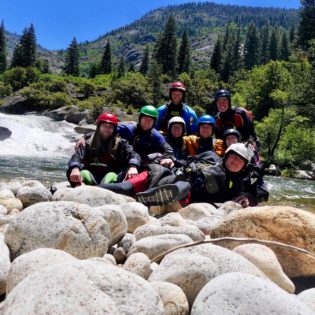 As my childhood kayak teacher Tom McEwan said, “I just bring him to the water, the river does all the teaching.” 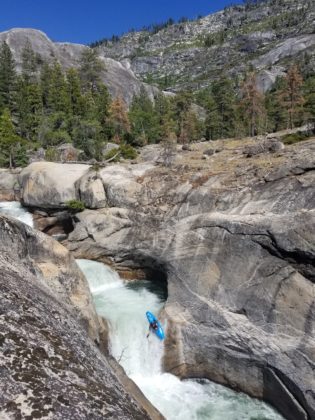 I was absolved of all sins. I was pure. Lightness. In an instant I was finally free.

Nathan was born in Canada but learned to kayak while living in the suburbs of Washington, DC. He spent much of his teenage years exploring Great Falls and other surrounding rivers. After college, he moved to San Francisco to pursue a career as a software engineer. He continues to live in San Francisco but spends many of his weekends paddling with friends on the rivers in the Sierras.